Abrasion-resistant plastics with a low coefficient of friction are highly sought after materials for use in a wide variety of industrial applications. Plastic components that require contact with mating surfaces must offer outstanding resistance to wear, along with displaying long life and high performance under constant friction. Plastics that are abrasion resistant are designed to retain their appearance, and also reduce costs associated with maintenance, wear and tear, and the subsequent system downtime that would follow.

Wear and friction are two properties that interact with solid surfaces that, over time, result in the deforming of a component and the loss of material. Wear of any material is the measurement of loss that occurs under-recorded loads, speeds, temperatures, and surface roughness. 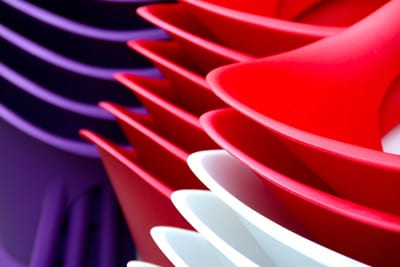 The wear resistance of plastic material used for industrial components must be able to perform, but also endure, in real-world applications under the most abrasive conditions. PEEK, UHMW, Acetal, and pDCPD are all good examples of ‘hard wearing,’ abrasion resistant plastics with low-friction that can be used in applications that require high performance and superior mechanical properties.

PEEK is a thermoplastic known for its naturally low-friction material, and well-rounded abrasive and fatigue wear resistance. Its impressive durability and performance in punishing environments make it a choice material for components across a wide variety of industries. It is useful at temperatures up to nearly 500 degrees Fahrenheit and self-extinguishes in heat and fire, making it highly recommended for use in electrical components with high continuous service temperatures, e.g. in aerospace. When reinforced with PTFE graphite and carbon, it is one of the strongest polymers available at room temperature. Unfilled grades are highly resistant in chemically aggressive environments. Because of its biocompatibility, high strength and modulus that approximates the human bone, PEEK has been used in such procedures as spinal implants and skull reconstruction. It is also a favorite choice for chemical processing and oil and gas companies.

Polydicyclopentadiene, or simply pDCPD, is a liquid plastic raw material with excellent abrasion resistance and low-friction. This thermoset resin has elasticity and is lightweight, but is also extremely impact and corrosion resistant. Its exceptional mechanical properties such as high temperature and corrosion resistance make it ideal for manufacturing of large specialty-shaped parts. Its excellent surface quality is abrasion resistant, reduces friction, and increases its paintability and glue adhesion. As a material, its features offer unlimited freedom of design for finished products. pDCPD is widely used in commercial and industrial applications around the world, such as for body panels for cars, trucks, buses and all types of parts of off-highway equipment and machinery.

Ultra High Molecular Weight Polyethylene is another thermoplastic that exhibits a very low coefficient of friction, along with 10 times the resistance to abrasion than carbon steel. It is also self-lubricating with extremely low moisture absorption, and it has the highest impact strength of any thermoplastic polymer presently on the market. UHMW is a cost-effective and versatile plastic known for its durability and machinability. UHMW is ideal for applications where the coefficients of friction are high, such as in wear strips, belt scrapers, guides, and rollers. It can also be machined for small bearings, large sprockets, and liner systems. Its exceptionally low coefficient of friction and inherent self-lubricating properties result in a smooth, noiseless operation that outperforms many metals.

Acetal boasts low-friction and high abrasion resistance and offers strength and excellent performance whenever wear applications are needed. High tensile strength, fatigue endurance, and creep resistance make it ideal for high-performance parts. It has excellent dimensional stability and is highly resistant to solvents and chemicals. Because of its good electrical properties and long-term stability, acetal is used in electrical applications. Its low-friction and moisture absorption give molded acetal parts high perform reliably in humid environments.

Unlike many plastics manufacturing companies, Osborne Industries has the capability to custom formulate its resin systems for high abrasion resistance. These polyester resins, typically reinforced with fiberglass, offer excellent abrasion resistant and low friction properties for extreme applications. Resistant to deformation at high temperatures and brittleness in extreme cold, Osborne’s polyester resins are a great solution for plastic components in outdoor environments or ‘under-the-hood’ applications.